The obscure Zazarac is not a misspelled Sazerac. It’s a drink unto itself. Its obscurity likely derives from the fact that nobody who makes it once is likely to do so again

One of the most obscure drinks I’ve blundered across is the Zazarac.

That may seem like a misspelling of the Sazerac, that otherworldly classic that comes to us via mid-19th century New Orleans. And some will argue that the Zazarac was the same drink, spelled differently as a litigation dodge.

But there are better reasons to believe that the Zazarac, as captured in certain editions of Harry Craddock’s definitive-for-its-time The Savoy Cocktail Book (1930), is its own thing.

And what a peculiar thing it is.

Zazaracs: Not just a spelling difference

I’ve lined them up below, adding what I’m calling #3, which appears in Harry Craddock’s book. 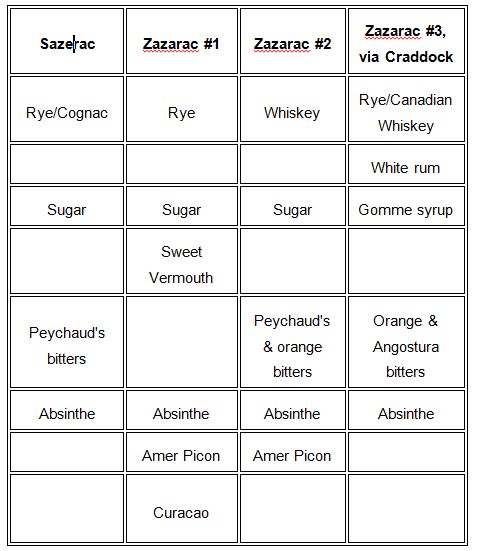 As you can see, the household comprises one perfect child and three black sheep.

The Sazerac and Zazaracs #s 2 and 3 all abide by the classic definition of a “cocktail”: Base spirit, sugar, and bitters. All share absinthe. But from there things get hairy.

It seems unlikely to me that any of the Zazaracs were attempts to produce the Sazerac and avoid legal trouble with the New Orleans Sazerac House importer, the French maker of Sazerac cognac, or any number of taverns nationwide with the same name.

At best they are heavy-handed riffs, at worst original desecrations.

And since all versions add to rather than replace ingredients of the Sazerac [excepting the swap of bitters in #3], it seems unlikely that early American supply chain issues drove these variations.

Nope. These Zazaracs are not legal dances to stay out of court. For better or worse, but mainly worse, they are purposeful creations unto themselves.

The Sazerac and the Zazarac have as much in common as a lucid dream and your kitchen junk drawer.

The Zazarac recipe presented here is a modified version of what appears in Wikipedia.

I know that’s lame, but bear with me. There’s a lot of confusion here, and the Wikipedia one appears to hunker pretty closely to one in the Savoy book, which became the reference recipe going forward.

Anyhow: Let’s grab a pair of tins and shake things up.

Actually we should stir them up, but that’s another twist in this odd little tale.

The recipes all say to shake, though there’s no citrus in sight. Maybe that’s a relic of the days when gummy gomme was used, which may have needed more agitation. Beats me.

I made this Zazarac cocktail several times, boozing it up, dialing down this or that, all in order to figure out why anyone bothered to write this recipe down in the first place, and why the esteemed Harry Craddock served it at the Savoy Hotel in the early years of the 20th century.

In one variation I eliminated the rich simple syrup and let the pastis carry the sweetener load. It was better. The rye came forward, the round rummy undertones intact. But the spirits were still surrounded by that high-pitched licorice racket, and the bitters seemed adrift.

So I tried cutting the pastis and let the simple syrup be the solitary sweet.

Maybe my expectations were down near the floor by that point, but this was not a horrific drink.

I now had in my glass, essentially, an idiot bastard Sazerac stepchild — like you ran out of rye and tried to stretch it with rum, over-poured the absinthe, added way too much sugar syrup, and used a mix of orange and Angostura bitters because you couldn’t find Peychaud’s at the grocery.

If, at the point of a spear, I were required to serve a Zazarac to guests, this is the one I’d make. Garnished with a wedge of apology and sprig of humility.

The mystery of the Zazarac’s obscurity today may be easily resolved by the fact that it sucks and the few people who heard of it quit making it.

I first stumbled across the recipe when scrolling through the Bar Guide, a 50s plastic cocktail recipe gizmo about which I have previously written. The recipe for the Zazarac, a bastard of #3, appears in the final slot, #80. Why is it there? Maybe to provide a Z yang to the Adonis yin. I have no idea.

Sadly, I have the 2015 reprint of the Savoy, and for the life of me can’t find Craddock’s Zazarac. The book was revised several times by others, so it’s likely the drink appeared in a later edition. Whether Craddock ever served, or even tasted the thing, is a question I leave to Savoy scholars.

A 2007 article in Forbes magazine publishes what it says is Craddock’s Zazarac recipe. But that one omits the orange bitters and calls for Canadian Club, which none of the other recipes citing Craddock do.

The usual authorities and arbiters, meantime, are silent on the Zazarac.

The point is: These are two different drinks, related more by phoneme than palate.

The Sazerac is terrific.