The alcohol-industrial complex has concocted a bewildering number of horatory days, weeks, and months. There’s National Martini Day [June 19], National Bourbon Heritage Month [September],  and National Liqueur Day [October 16]. Inevitably, this gets weird. In an act of collaborative mercy, Harvey Wallbanger Day and National Shot Day both happen on November 8. Because there is no god, there is now a National Rhubarb Vodka Day. And so on.

Which provides me all the justification I need to take the following action:

I hereby declare, with the authority invested in me by absolutely nobody whatsoever, National Kumquat Cocktail Fortnight™. Hereafter it shall be observed annually from February 25 through March 11 (March 10 on leap years).

Kumquats — small ovals of citrus the size of an olive, sweet of skin and sour of belly, believed to be native of China — have a limited season, from January through March. This makes a fixed celebration during this period actually defensible. [I’m not sure the creators of National Rhubarb Vodka Day can make the same claim.]

This compressed availability issue may explain why, against all reason, the kumquat has failed to become a stable behind craft cocktail bars everywhere. It should.

Kumquats are pretty little things, easy to muddle, and fairly versatile for an exotic.

The miniature orange orbs are sharp and punchy, a frisky variation on – and easy collaborator with – the more familiar citrus flavors we know too well.

They have a funny name that invites a lowbrow leer.

You can probably find them from January through March at Whole Foods and similar high-fallutin’ food barns.

Like the very best people I know, kumquats are sweet, tart, and just slightly bitter.

They are also the only citrus fruit whose skin you can eat. Which is to say: In drinks, kumquats function as an edible citrus garnish.

Smash of the Titans

I became a kumquat konvert [I won’t do that again] at the estimable Clover Club in Brooklyn. In season, they serve a drink called Smash of the Titans. I was lucky enough to be served one last February.

The drink is a delightful domestic partnership between a Whiskey Smash and a Caipirinhia, with the sassy little love nuggets standing in for the lime quarters.

Smash of the Titans cocktail recipe 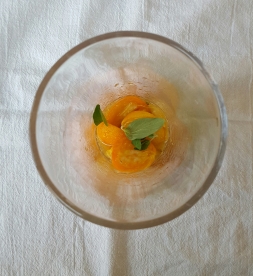 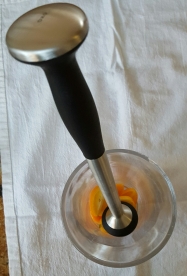 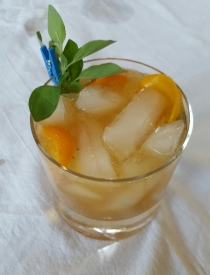 Shake only to mix, serve without straining, leaving the debris in the glass. Garnish with oregano. Eat the kumquat skins for a burst of flavor!

How to make a Smash of the Titans cocktail

Smash of the Titans tasting notes

At any time while enjoying your beverage, pluck out a muddled kumquat shell and eat it. Sweet skin, sour belly. I’m reminded of the label on SweeTarts candy when I was a kid: “Bite ’em for a burst of flavor!”

If in public, eat the kumquat shells in your drink extravagantly, the better to call attention to your gastronomic audacity of eating a citrus garnish whole.

If anyone asks what you’re doing, meet their gaze, level your eyes, and forcefully say: “I am eating a kumquat. Would you like one of my kumquats?” You will have oregano in your teeth.

This should either silence things immediately or launch a lifelong friendship. I’m usually fine either way.

Frankly, the Smash of the Titans is such a great drink it’s sufficient to build an official National Fortnightº around. But here are three more recipes to get the kumquats rolling:

Kumquat Smash In this drink, attributed to Dimitris Kiakos of the Gin Joint in Athens, Greece, kumquats are joined by gin, lemon juice, maraschino, and a pinch of nutmeg.

Kumquat Champagne Cocktail Bon Appetit unloosed this one, which adds some Grand Marnier to the bubbly along with kumquats, onto the world in 2004.

Smashing Leaves This creation, a gentle tweak of the Smash of the Titans, is the creation of Feisser Stone of Hinoki & the Bird in Los Angeles.